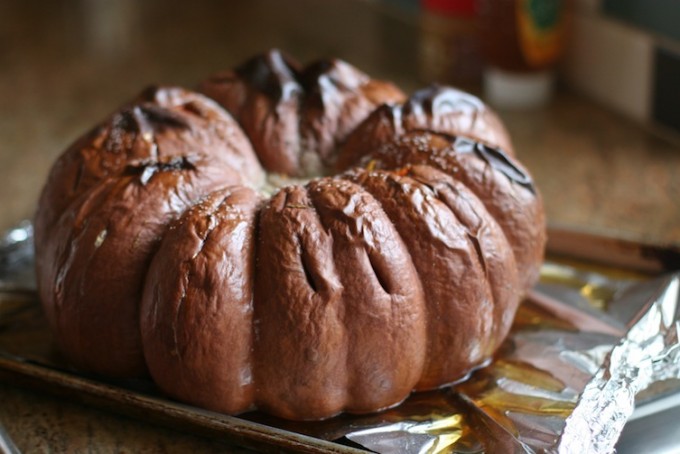 Excerpt from “A Thousand Days In Venice” By Marlena De Blasi

“For me, food is far beyond the metaphors for love and sentiment and “communication.” I do not demonstrate affection with food. Less noble than that, I cook because I love to cook, because I love to eat, and if someone is near who also loves to eat, all the better. The truth is I have always cooked for crowds, even when there were no crowds-for the crowds I, always and still, wished there to be. My children say I once made a pumpkin soup, that I roasted a surfeit of jack-o’-lanterns into caramelized softness, mixed the flesh with cognac and cream and a few scrapings of nutmeg. There were gallons of it, they say. After a week’s worth of suppers, they watched me add shreds of Emmenthaler and just-cracked white pepper and egg yolks to what was left. They say I folded in whites whipped to stiffness and turned the mass into buttered, crumbed molds, three very large molds, they say. Voila, savory pudding. I remember that it was wonderful, even on the second and third nights. Lisa will tell you it was then that her skin began to turn orange. In the end I scooped what was left of the pudding into a work bowl with some ricotta and a few tablespoons of grated Parmesan and made gnocchi: pumpkin gnocchi with sage butter and roasted pumpkin seeds is how their story ends, though I remember one more night in the great pumpkin episode. Yes, I’m sure we had those gnocchi, at least once, au gratin with cream and tiny dollops of Gorgonzola. Plenty from spoils. It is the oldest thing I know about myself, the first thing, really. Except for the loneliness.” 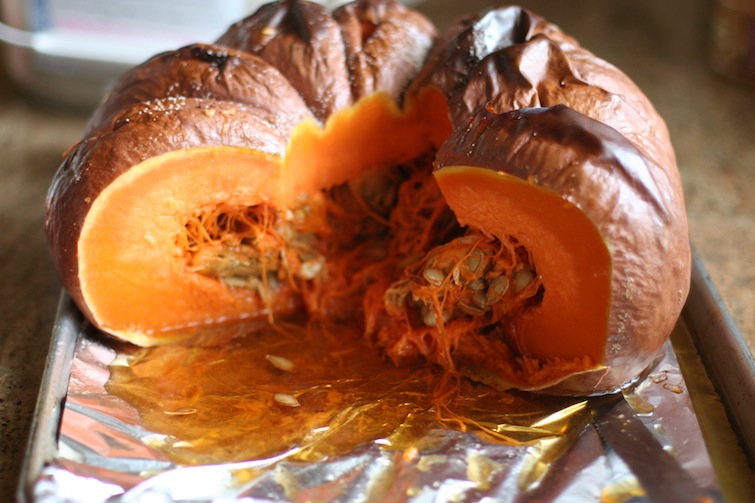 The summer of 2003 I ventured out to New York for a weekend getaway with a girlfriend, our goal, to eat as much of what N.Y had to offer in 2 days. On the way there I read Marlena De Blasi’s “A Thousand Days In Venice” and it was pure joy. The part that has always stuck with me is this excerpt above. Actually, it seared a path to my soul so much so that I almost feel naked just sharing this with you. I felt as though she had somehow tapped into a part of me I did not even understand myself until I read it. Even the last line made a connection, but it stems from my childhood and I have been blessed to marry a wonderful man who has managed to erase that.

This paragraph has traveled with me through the years and this week I decided to tackle the pumpkin I bought at Trader Joe’s for Halloween this year. I left it by my door outside and it held up just fine. My 4 month old was taking a nice long nap so I started by washing it and then after drying I coated it with oil and sprinkled it with sea salt. I then pierced some holes in the flesh and made two vent holes as to prevent it from filling with steam and exploding which would have ended the fantasy right then and there! I roasted it on a sheet pan at 400˚F and let it take its time. About an hour and a half later I was presented with a beautiful caramelized pumpkin, just as I had envisioned. I let it cool and then began the task of breaking it down piece by piece. This act was very therapeutic, the most rewarding of my experience. I then proceeded to make a pumpkin soup but instead of cognac and cream I decided to try a Thai inspired soup. I wanted to pay full respect to this grand pumpkin so I decided I would not let any one part go to waste. . I used about one-third of the pumpkin’s flesh for the soup, one-third was pureed simply for my baby niece Liliana and dog Toby. Liliana is 8 months and loves her veggies and Toby is spoiled with fresh made food, the skin peels were fed to my hens, the water I collected while roasting went into the soup, and the rest I put in a storage bag and froze for later use.

My journey ended with lots of dirty dishes, a baby ready for Mommy’s attention, and a dream fulfilled. I have to say that Marlena De Blasi’s experience was an organic one that grew upon itself and mine was not but it was enjoyable nonetheless. 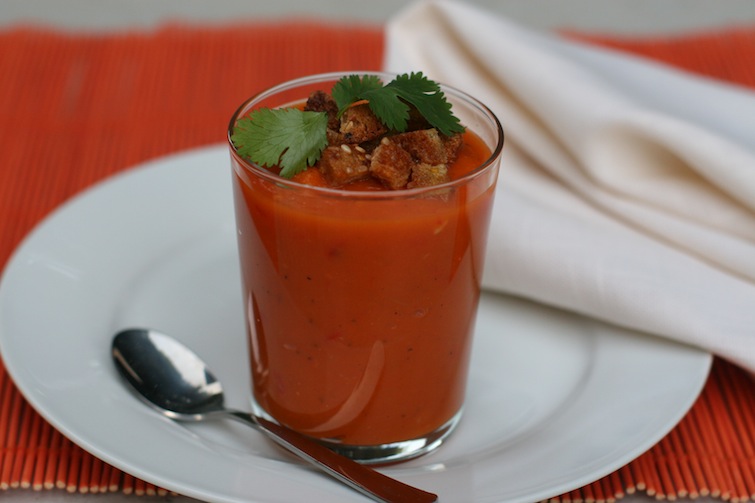 Cube the pumpkin and set aside in a bowl. In a soup pot, sauté the leeks and onions in the grape seed oil until translucent. Next add the carrot, garlic and ginger and sauté for another 3 minutes. Now add the curry paste and sauté until fragrant, about 2-3 minutes more. Add the coconut cream, fish sauce, palm sugar, pumpkin cubes and water to just cover. Let it cook on simmer for about 20 minutes or until the carrots are fork tender. Now puree until smooth. At this point you can strain the soup for a silky mouth feel or skip the straining and keep it as a thicker puree. If you find that it is too thick you can always adjust the texture with a bit more water or coconut milk but be careful not to add too much or it will dilute the flavor. Reheat when you are ready to serve and garnish with home made croutons and cilantro leaves, stripped from the stem.

Toss the bread cubes with enough olive oil to coat, sprinkle with salt and pepper to taste and bake on a baking sheet in a 350˚F pre-heated oven until slightly brown and crunchy. You can play around with the type of bread, oil and seasoning you use. This time I had a sunflower crusted whole-wheat baguette left over from last night’s dinner.

Copyright © 2021 - Behind The Stove. All rights reserved